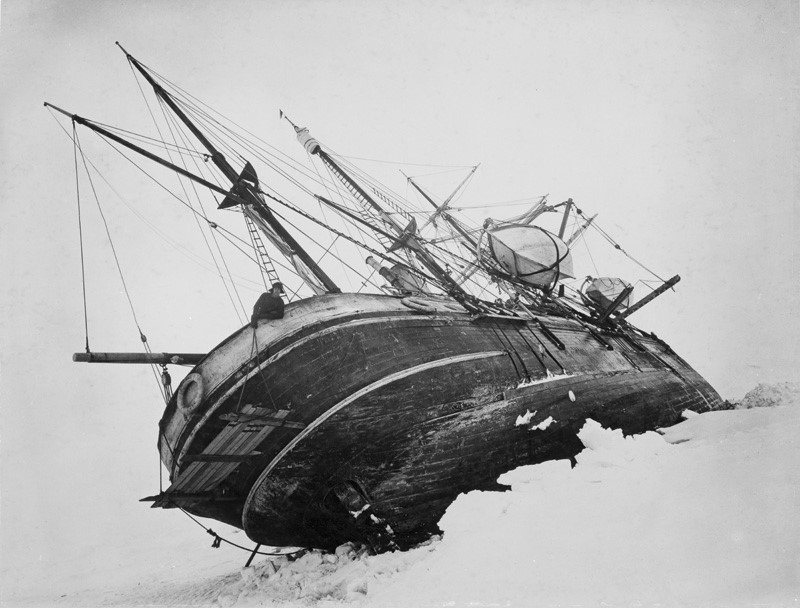 London, 10 April 2018:  In an event held at The Royal Geographical Society in South Kensington today, it was announced that, during January/February 2019, a major international scientific expedition will explore one of the coldest, harshest and most remote locations in the world:  the Weddell Sea off Antarctica.  The objective of the expedition is to survey the underside of the Larsen C Ice Shelf, document the rich and little-studied marine life of the western Weddell Sea ecosystem, and attempt to locate the wreck of Sir Ernest Shackleton’s ship ‘Endurance’, which was trapped and crushed by the ice and sank there in 1915.

Funded by a charitable trust in the Netherlands, The Flotilla Foundation, the Weddell Sea Expedition 2019 has a pioneering programme of science and exploration planned, under the leadership of Professor Julian Dowdeswell, Director of the Scott Polar Research Institute at the University of Cambridge. The expedition will involve an international team of researchers, comprising glaciologists, marine geologists, marine biologists, marine biogeochemists, oceanographers and marine archaeologists, from the Scott Polar Research Institute, Nekton Foundation, University of Canterbury in New Zealand, as well as the University of Cape Town and the Nelson Mandela University in Port Elizabeth, South Africa. The team will use autonomous underwater vehicles (AUVs) to survey the sea floor down to beyond 3,000 metres, study cavities on the underside of the ice shelf, and search for the wreck of ‘Endurance’.

The 45-day voyage will be conducted from the South African polar research and logistics vessel ‘S.A. Agulhas II’, owned by the Department of Environmental Affairs.  Built in 2012, the vessel is one of the largest and most modern polar research ships anywhere in the world, has a wide range of science laboratories and facilities, and offers a powerful and effective platform for the multi-disciplinary research.

Antarctica has about 1.5 million square kilometres of floating ice shelves, which have been surveyed and studied from above, but only very rarely from beneath.  Many of these ice shelves are thinning and retreating rapidly, making scientific investigations here very timely.  The Larsen A and B ice shelves collapsed suddenly in a matter of weeks in 1995 and 2002, respectively, and one of the biggest iceberg calving events ever recorded took place from Larsen C Ice Shelf in July 2017.  Ice shelves are of particular scientific interest because they are susceptible both to atmospheric warming from above and ocean warming from below.

The Weddell Sea is one of the most pristine marine ecosystems in the world and has been nominated as a large, international Marine Protected Area. The expedition will gather vital baseline biological data on the rare and little-studied species which inhabit this ecosystem, as well as studying the key physical processes driving changes in the region’s sea ice, ocean currents and the fringing ice shelves.

Co-ordinating with the underwater research and survey work, Professor Wolfgang Rack and his team from Gateway Antarctica at the University of Canterbury in New Zealand, will use specially-equipped aerial drones to measure sea ice thickness and snow depth, and will also assist with the navigation of the ‘S.A. Agulhas II’ through the pack ice in the Weddell Sea.  The drone measurements will be coordinated with data from an upward-looking AUV to give a better understanding of sea ice formation. South African researchers from the Oceanography Department of the University of Cape Town and the Nelson Mandela University will conduct oceanographic and biogeochemical work from the vessel.

Professor Dowdeswell said: “The Weddell Sea Expedition 2019 will give us an unprecedented opportunity to investigate and explore one of the most remote, and least-studied places on our planet.  Ice shelves surrounding the Weddell Sea are important because they affect the mass-balance and stability of the Antarctic Ice Sheet, as well as ocean-current circulation.  If ice shelves thin, break up to produce icebergs and retreat as the atmosphere and ocean waters warm, then ice flow from the interior accelerates and more mass is lost, contributing to global sea-level rise.  Melting at the base of ice shelves and calved icebergs also releases fresh water which can inhibit the generation of very dense Antarctic Bottom Water; one of the major drivers of the thermohaline circulation of the oceans, which provides vital nutrients to major fishery grounds around the world.”

The Weddell Sea Expedition 2019 hopes to inspire young people about science, engineering and technology, and the protection of Antarctica, and is partnering with the Royal Geographical Society to ensure that the expedition’s research and findings are disseminated as widely as possible to schools and students in the UK, South Africa and beyond.

For images, further media information and/or to arrange an interview at the launch event with Professor Dowdeswell or one of the other members of the expedition team, please contact Debra Taylor at toucanmoon, debra@toucanmoon.com +44 7956 852197

About the Flotilla Foundation: The Foundation was established as a not-for-profit organisation in February 2017.  The Foundation’s objective is to promote for the benefit of the public the conservation, protection and improvement of the physical and natural environment, and in particular of the world’s oceans and seas. https://flotillafoundation.org/

About the Scott Polar Research Institute: The Scott Polar Research Institute was founded in 1920 as part of the University of Cambridge to enhance the understanding of the polar regions through scholarly research and publication. Research is conducted in both the natural and social sciences, with glaciology a particular speciality. The Institute also houses the world’s premier Polar Library, extensive archival, photographic and object collections of international importance on the history of polar exploration, and a Polar Museum with displays of both the history and contemporary significance of the Arctic and Antarctic and their surrounding seas. https://www.spri.cam.ac.uk/

About the Nekton Foundation: The Nekton Foundation’s mission is to explore the deep ocean to accelerate sustainable marine stewardship.  Nekton’s research expeditions deliver new, scientific knowledge on the function, health and resilience of the planet’s most critical, yet least explored, ecosystems. https://nektonmission.org

About the Nelson Mandela University: The Nelson Mandela University is the largest higher education institution in the Eastern and Southern Cape, South Africa, spread across seven campuses. In 2017 the university launched the Ocean Sciences Campus, a dedicated ocean sciences centre of excellence that will foster transdisciplinary research and innovation, with a postgraduate focus, necessary to address the ecological, economic and social sustainability challenges of the oceans. https://www.mandela.ac.za