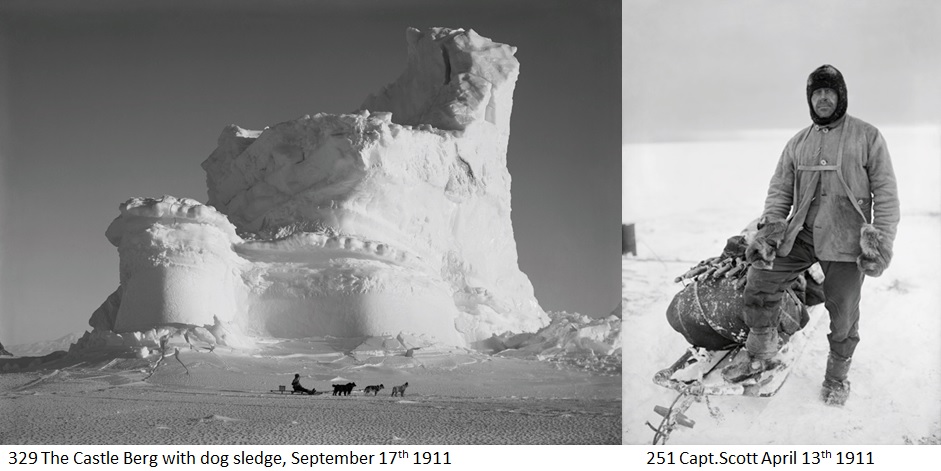 London, 5 January 2016: One Ocean Expeditions (OOE) is the first, and currently only, small adventure cruise ship operator to agree a partnership with the Scott Polar Research Institute (SPRI) at the University of Cambridge, and Salto Ulbeek publishers to exhibit limited edition platinum prints of the iconic photographs taken by Herbert Ponting during Captain Scott’s British Antarctic Expedition in 1910-13.

The prints have been delivered to OOE’s two ships – Akademik Sergey Vavilov and Akademik Ioffe – while in port in Stanley, Falkland Islands, ready for their departures on 19 and 30 December 2015 respectively.

Handmade from Ponting’s original glass plate negatives owned and conserved by the Scott Polar Research Institute, the prints were produced using the platinum printing process, a photographic technique first introduced in the19th century, and still highly sought after for its unrivalled aesthetic and archival properties.

Herbert Ponting, one of the most celebrated photographers of the 20th century, was the “camera artist” to the British Antarctic Expedition. The photographs he took in Antarctica are one of the most famous, beautiful and compelling visual records in the history of exploration. Ponting documented all facets of Scott’s expedition, including photographs of the men, their ship – the Terra Nova, daily life in the hut the explorers built at Cape Evans, the scientific research, wildlife, and the frozen landscapes of Ross Island.

Each OOE ship has been furnished with seven platinum prints specially selected by SPRI for hanging in the on-board library. The exhibition is expected to generate much interest amongst passengers, some of whom will be travelling in the wake of the early polar explorers.

Andrew Prossin, Managing Director of OOE, says, ” All of us at One Ocean Expeditions are delighted to have the opportunity to exhibit the historic and iconic photographs taken by Herbert Ponting of Captain Scott’s British Antarctic Expedition 1910 – 1913. We have developed an exciting new partnership with the Scott Polar Research Institute and Salto-Ulbeek publishers to deliver the exhibition, and we can’t wait for the exhibition to open and for our passengers to view, enjoy and be inspired by these amazing images.”

Passengers will have the opportunity to buy the limited edition prints during their voyage, with half of the proceeds going to the Scott Polar Research Institute to contribute to its environmental research and heritage activities, including its internationally important polar library, archives, and museum.

Prices per print, which include iconic photographs of Captain Scott, vary depending on format and number sold, with medium sized prints (50 x 36cm) ranging from €1,950 to €4,400 each. Orders will be taken on board and prints shipped to clients worldwide.

The prints will be displayed on board OOE’s ships for three Antarctic seasons, finishing in March 2018.