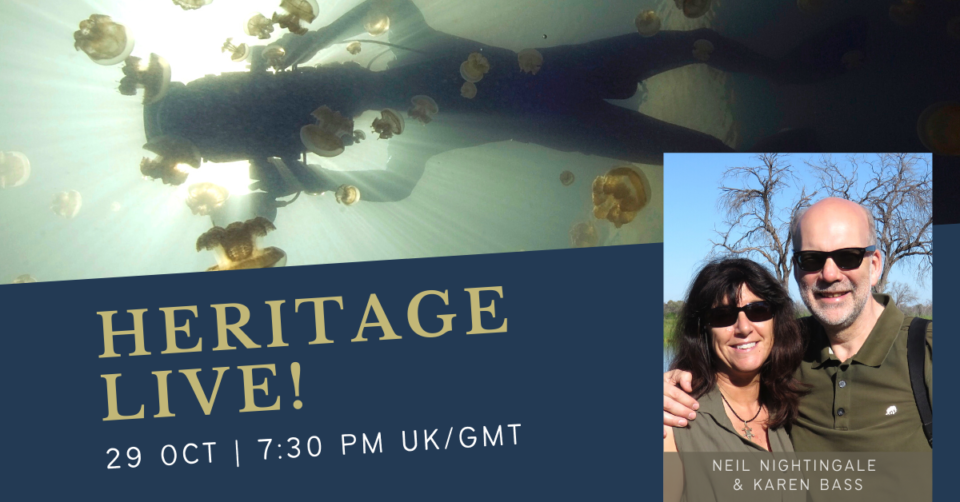 For more than 30 years, Heritage Expeditions has pioneered voyages to some of the most wild and biologically rich regions on the planet. Their mission is to increase awareness and conservation of the natural world through responsible expedition travel.

Wildlife filmmakers, Karen Bass and Neil Nightingale, have had the extraordinary and privileged experience of travelling with Heritage Expeditions (3x!) to some of the most biologically rich and hard to reach corners of the globe: Polar Bear denning capital Wrangel Island on Across the Top of the World, Papua New Guinea and the Solomon Islands on Melanesia Discoverer and the Solomon Islands and Vanuatu on Secrets of Melanesia.

“As BBC and National Geographic wildlife filmmakers, we’ve made a life and career from adventure and a ceaseless passion for nature”, says Neil Nightingale. “Through our documentary films and TV series, including David Attenborough’s Planet Earth and Nature’s Great Events, we’ve helped to bring the wilds of nature closer and more accessible to all who share an interest in the natural world. Our work has taken us to some of the most remote, farthest reaches of the planet – from the polar regions to rainforests, and from flying thousands of feet above mountains and deltas to diving the depths of our mysterious oceans and waterways.”

Join Neil and Karen later this month, along with Heritage Expeditions’ Isaac Wilson, for a live online discussion as they offer a window into documentary filmmaking life, share highlights from their South Pacific adventures, and discuss what they are most looking forward to in 2021!

Next year, they’ll be on board again with Heritage Expeditions for the Indonesian Explorer: Raja Ampat to Papua New Guinea. “Looking at the itinerary, it’s quite astonishing to see places that previously took film crews a week or two to access being reached within a day on a Heritage trip,” says Karen Bass.  “In all our travels, we frankly haven’t been anywhere with more exquisite coral reefs than Raja Ampat. Simply donning a mask and snorkel delivers a world-class diving experience into an astounding underwater Eden. During the FB Live Event, we’ll share what it’s like swimming with whale sharks and travelling through Jayapura and Sepik River ‘on assignment’ – and, of course, which two species are atop our birding list!”

Karen Bass is a multi-award winning television director and producer. In 20 years at the BBC Natural History Unit, she has made wildlife films in almost every environment across the Earth: from the rainforests of the Congo (where she produced the first-ever film of our closest relative, the bonobo) to the deserts of Libya, Syria and Jordan; from the icy peaks of the Andes to the swamps and forests of the Amazon and Borneo; from erupting volcanoes in the Caribbean to the extraordinary lives of crocodiles in Australia and South Africa.

Karen’s major BBC TV series include Andes to Amazon, exploring the wildlife and extreme landscapes of South America; Jungle, an investigation of the world’s rainforests; Wild Caribbean, featuring the colourful and varied nature, weather and landscapes of the Caribbean; and Nature’s Great Events, a dramatic portrayal of the planet’s most spectacular wildlife events. Karen also produced Untamed Americas, an Emmy award-winning series on the epic natural history of North, South and Central America, for the National Geographic Channel.

As an award-winning BBC wildlife filmmaker, Neil has travelled and worked in many of the wildest corners of our planet, from the polar regions to the tropics. Through his films and TV projects, he shares his passion for the natural world with many millions of people globally, inspiring them with the wonders and importance of nature.

We hope you will join us for this Facebook Live Event broadcasting from the UK and New Zealand, from our living room to yours! At the end of the talk, there’ll be time to respond to your questions from the comments section in real time. And, for those unable to join, you can catch the replay at your leisure. We look forward to great discussion on 29th October.