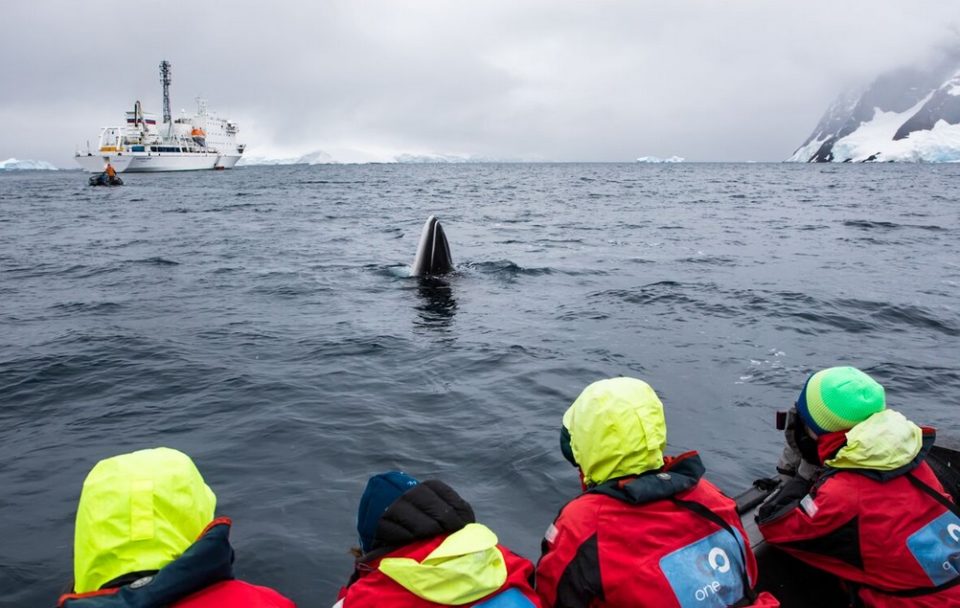 London, 31January 2019: As a core supporter of the new feature documentary The Map To Paradise, One Ocean Expeditions (OOE) is proud to announce the world premiere taking place at the Santa Barbara International Film Festival on 31January 2019. The premiere follows a private screening hosted by Prince Albert II of Monaco at the Oceanographic Museum of Monaco in June 2018.

Australian filmmakers Danielle Ryan and James Sherwood travelled the globe for three years in search of exceptional ocean conservation heroes to tell the story. One Ocean Expeditions collaborated with the film crew while they travelled on board Akademik Ioffe in 2017. An Antarctic segment was filmed with renowned marine mammal scientist Ari Friedlaender, who works with expedition cruise specialist, OOE, to perform ground breaking whale research. OOE is the industry leader in supporting nationally recognized science programs and, over the last decade, has provided more than 120 days per vessel (360 days) per year to scientific organizations in the study of ocean health.

The Map to Paradise delivers a colourful collection of character-driven stories that convey the quest of individuals, communities and nations doing what they can to protect the world’s last wild and pristine marine environments. The 95-minute feature film also includes a cast of renowned figure-heads, such as Prince Albert II of Monaco, President of Palau Tommy Remengesau, Sea Shepherd’s founder Captain Paul Watson and National Geographic Explorer Enric Sala.

Co-Director Danielle Ryan says that the release of The Map to Paradise is timely, as global talks have recently begun for a treaty to protect the High Seas. “Countries around the world are currently looking to re-map, re-zone and re-write the rules on a global and local scale – an exciting new protection paradigm for nature in an age where humans are the primary cause of a massive loss of species,” said Ryan, “The solutions are there, and they are proven to work, but we aren’t embracing them on a large enough scale.”

With regional premieres planned for both Antarctica and the Canadian Arctic aboard One Ocean Expeditions’ vessels Akademik Sergey Vavilov and RCGS Resolute, the film allows OOE to share and promote their science initiatives with a broader audience. Leading by example, OOE is solidifying their commitment to conserve and protect ocean ecosystems around the world.

“One Ocean Expeditions invests a great deal into the protection of the fragile ecosystems we visit,” said One Ocean Expeditions’ General Manager Catherine Lawton, who attended the pre-screening in Monaco, “It’s an incredible honour to see our dedication to scientific research captured in such an inspiring and collaborative approach.”

For more on Marine Mammals: https://discover.oneoceanexpeditions.com/if-you-like-whales-this-is-what-you-should-do/

For more on Ocean Health: https://discover.oneoceanexpeditions.com/science-program/

For more on Bluebottle Films and The Map to Paradise movie: http://www.themaptoparadise.com

About Bluebottle Films – Co-Directors Danielle Ryan & James Sherwood
The sea-loving duo have directed, produced, written and edited a number of grassroots short documentaries about protecting the land and the sea in Australia, with the support of leading conservation groups. The Map to Paradise is their first independent feature documentary, inspired by their work on shorter ocean films, which took them to remote destinations of Australia. The films have toured around Australia and overseas at grassroots events and festivals over the past few years, helping to campaign for positive policy change to protect nature. Their previous works have earned them some grassroots festivals awards, such as for best environmental journalism, best underwater world film, and a Sylvia Earle Ocean Conservation Award. James and Danielle’s first ever documentary was a journalism piece about child labour, which aired on Dateline, SBS, Australia.