Antarctica’s Year of the Cycle 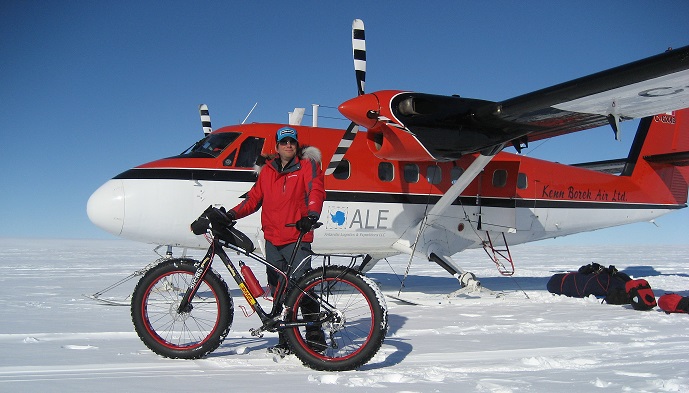 Antarctica’s Year of the Cycle

This Antarctic season, three expeditions cycled to the South Pole with Adventure Network International (ANI), each in their own way achieving something never before accomplished and proving the ability of cycles in polar terrain.

The first to arrive

British adventurer Maria Leijerstam set out to do something new – and she did just that. Maria became the first person to cycle to the South Pole from the edge of the Antarctic continent, arriving at the South Pole on December 27, 2013.

Maria used a recumbent trike, designed specifically for the challenge by the White Ice Cycle team. She opted for the Leverett Glacier route due to its compact surface created by the South Pole traverse that delivers ANI’s fuel to the South Pole station each year. She cycled every inch of the way, covering 396 mile/638km in 10 days.

Arctic Trucks drove Maria to her start point on the Ross Ice Shelf at the edge of the Antarctic continent. The vehicles then accompanied her as she cycled up through the Trans-Antarctic Mountain range and across the polar plateau to the South Pole. For more information click here here

American Dan Burton, owner of Epic Bikes, and Spaniard Juan Menendez, both traversed the longer, Hercules Inlet to South Pole route. Each rode a fat bike. Each travelled solo. Juan’s expedition was unassisted (no re-supplies), while Dan received two re-supplies along the way.

Along with cold, wind and whiteout, the un-compacted 730 mile/1170 km route posed additional challenges for both cyclists. Six-foot high ridges of sastrugi demanded technical riding skills and soft snow provided little traction, making some sections difficult or impossible to ride. Despite the challenges, both men persevered and arrived at the South Pole in their own way.

Juan completed the first unsupported and unassisted cycle to the South Pole, carrying skis to help him through the hardest sections and Dan challenged himself to ride every possible mile, even when it meant slow, laborious progress. Read their blogs for more information

Bikes for work. Bikes for recreation. Bikes are here to stay.

Fat bikes are proving themselves useful – and fun – at ANI’s Union Glacier Camp. The bikes help reduce their carbon footprint by providing an environmentally efficient (and quiet) alternative to snowmobiles for trips around camp. The bikes are also available for recreational riding – primarily on the camp’s groomed, 6 mile/10km loop.

Bikes may have their limitations when it comes to snow travel but for ANI they have proved their worth in Antarctica and are here to stay.