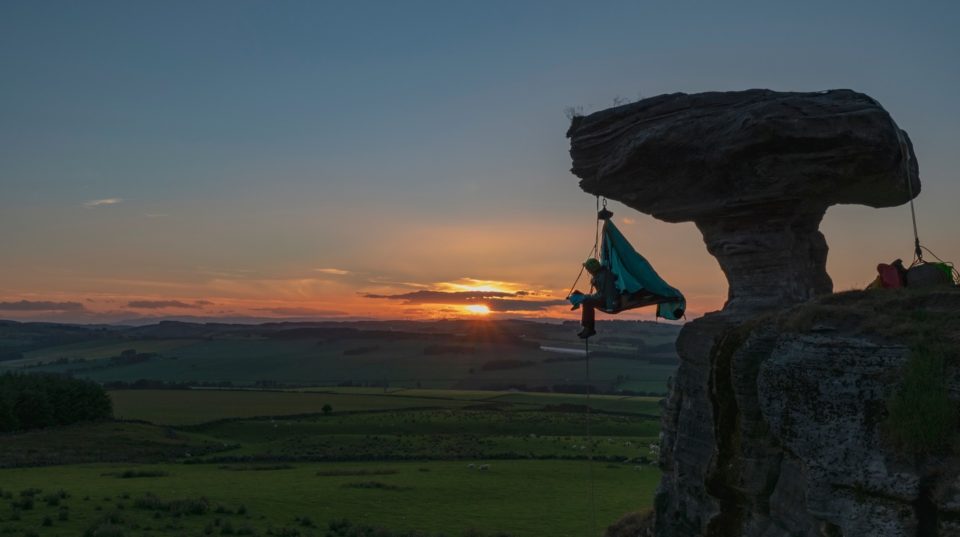 London, 7 March 2019:  Recently-appointed by leading meditation and sleep app, www.calm.com, as the world’s first Sleep Storyteller-in-Residence, travel writer and adventurer, Phoebe Smith, is sending millions of people to sleep with relaxing tales about places that she has visited around the globe.

Arguably the most calm-inducing location of all seems to be Provence in the south of France, the subject of ‘Blue Gold’, Calm’s single most popular sleep story to date.  In it, Phoebe soothingly describes a slow-paced journey through the region’s swathes of lavender fields and tranquil, fortified villages.  Her carefully-crafted meanderings – combined with the velvety tones of narrator Stephen Fry – have resulted in Blue Gold being listened to at bedtime by almost two million people a month – that’s around 15 million listeners who’ve been lulled to sleep already.

As the world’s only ‘extreme sleep adventurer’, Phoebe knows a thing or two about trying to get to sleep in some unlikely locations such as mountain tops, glaciers and inside tree trunks.  However, she sometimes finds it difficult to get to sleep in her own bed, so is happy that her sleep stories – or bedtime stories for grown-ups – are helping other people who struggle to nod off at night

The 17 sleepy audio tales that she has written so far for the Calm app, are designed to help adult listeners to wind down and fall in to a slumber, using a mix of soothing words music and sound effects.

All of the stories have been inspired by calming destinations visited by Phoebe, and include ‘Elephants of Nepal’, based on a scenic safari in Chitwan National Park, narrated by Joanna Lumley; ‘Morocco’s Hidden Forest’, describing Phoebe’s own experience of sleeping wild in the cedar forests of North Africa and the first of her stories that she is narrating herself; and her latest story to be released ‘Stargazing on Stewart Island, New Zealand’ a magical trip Down Under to explore the colourful cosmos from its most breathtaking vantage point, Stewart Island.

2019 marks the 90-year anniversary of The Ghan, an incredible rail adventure through the iconic Outback, recently experienced by Phoebe resulting in her sleep story ‘Crossing Australia by Train’.

The Calm app now offers listeners the choice of 120 sleep stories, which have been listened to in total some 100 million times since their launch two years ago.  A new story is added each week.

A free seven-day trial of Calm is available, after which the annual subscription costs £35.99. For many, it’s a small price to pay for a good night’s sleep.

For a blog post on Phoebe Smith visit http://bit.do/eKucz

For pictures, audio & video of Phoebe Smith and her sleep stories: http://bit.do/eKub

Widely thought to have relaxing properties that aid restful sleep, lavender blooms in Provence from late June until early August.  Miles of uniform purple promenades cross the rolling landscape, intersected by myriad walking and cycling paths creating an idyllic backdrop crying out to be explored on foot or by bicycle.  For further information about tour operators offering holidays to this region, contact the Association of Independent Tour Operators, www.aito.com.

Follow the link below to listen to Blue Gold, narrated by Stephen Fry – obviously best tried at bed time!

Sleep Stories written by Phoebe Smith and available now on the Calm app:

Calm.com is the #1 app for meditation and sleep, with over 37 million downloads to date and an average of over to 75,000 new users daily. It was recently named Apple’s 2017 iPhone App of the Year, out of over two million apps, and “Editors’ Choice” on Google Play. It was also ranked by a major recent study of 200,000 iPhone users by the Center for Humane Technology as “the world’s happiest app” – the single app that left users feeling happiest from spending time on it

Calm’s mission is to make the world happier and healthier. Founded in 2012 by British entrepreneurs Michael Acton Smith OBE and Alex Tew, it is best known as a sleep, meditation and mental wellness app, popular on both the App Store and Google Play

The Calm app provides unique audio content that is evolving to tackle some of the biggest mental health challenges of today: stress, anxiety, insomnia and depression. Its most popular feature is a 10-minute meditation called The Daily Calm that discusses a new mindful theme and inspiring thought every morning

Calm uses a “freemium” model. The basic app is free but a paid subscription to Calm Premium accesses over 100 hours of premium content, including an ever-growing library of advanced meditations; over 120 soothing Sleep Stories (the first bed-time stories for grown-ups, now listened to some 100 million times) and sleep music; calming nature scenes and sounds; a breathing tool and Calm Masterclasses taught by world experts.

Access to Calm’s full library of 120+ Sleep Stories, advanced mindfulness programs, a new meditation every day, and a new Calm Masterclass every month, costs £39.99 per annum after a 7-day free trial.