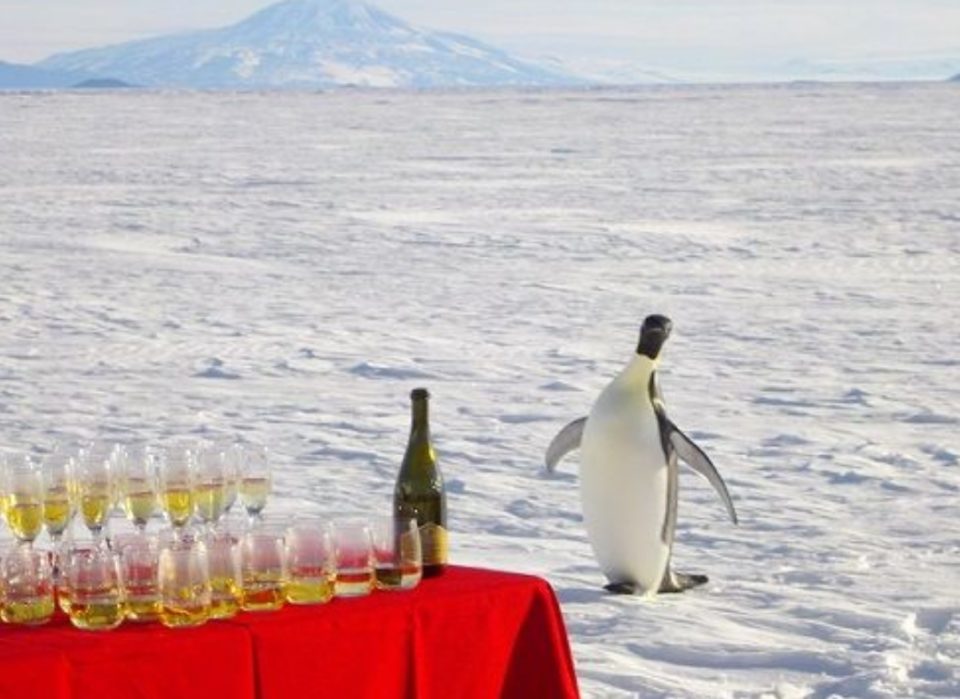 Christchurch, New Zealand, 27 January 2020:  A well-dressed emperor penguin charmed its way onto Heritage Expeditions exclusive guest list during the pioneering small-ship expedition cruise company’s Antarctic celebrations on the 200th anniversary of what is widely regarded as the first sighting of the frozen continent.

While most ships are known for passing in the night, Heritage Expeditions brought its sister vessels Spirit of Enderby (Professor Khromov) and Akademik Shokalskiy together in the Ross Sea for a special celebration with champagne and dessert on the Antarctic ice.

The auspicious milestone from Fabian Bellingshausen’s 1820 Russian Circumnavigation called for an extraordinary celebration, with expedition leaders Nathan Russ (Khromov) and Samuel Blanc (Shokalskiy) surprising Heritage Expeditions’ 100 intrepid explorers on each of its Ross Sea ‘In the Wake of Scott & Shackleton’ voyages with the Antarctic rendezvous 77˚ south of the equator, a first in the New Zealand company’s 35-year history.

The celebrations also caught the attention of the local wildlife, including a curious emperor penguin and two orca briefly observed spy hopping from the ice edge. The party-crashing penguin was the first to arrive, torpedoing out of the water and belly sliding over the ice to join Heritage’s expedition team as they set up, as guests watched in disbelief from the two ships parked at the ice edge between Mount Erebus and Mount Discovery.

Though expeditioners were reminded and mindful of keeping their distance and giving the animal space during the festivities, the suave surprise celebrity guest mingled freely and posed for photos.

During a short toast, Nathan Russ (also a co-owner and Operations Manager of the expedition cruise company) said “the anniversary is an important one for Heritage Expeditions as Antarctica and its explorers were the inspiration behind the company”.

Russ continued to say, “We are a family company following in the footsteps of legends – Shackleton, Scott and Amundsen. We had to bring both ships together on the ice to celebrate as one big happy family, because that’s what Heritage Expeditions is all about.”

As with most party animals, the penguin was the last to leave – continuing to watch guests as they boarded the Zodiacs and their respective expedition vessels.

In the Wake of Scott & Shackleton is a 30-day exploration to Antarctica’s Ross Sea including New Zealand and Australia’s Subantarctic Islands. Travel is on board an authentic, ice-strengthened expedition cruise ship with a maximum of up to 50 guests.

Prices for In the Wake of Scott & Shackleton start from US$23,000pp including twin berth in a cabin with porthole and shared bathroom, pre/post cruise transfers, one night’s half-board hotel accommodation in a twin room, all meals on board, expeditions, lectures and the services of knowledgeable guides and crew.

For more than 30 years New Zealand-based Heritage Expeditions has been a pioneer in environmentally responsible, conservation-focused voyages to some of the world’s least-explored, wild and biologically rich regions.

Travelling on board one of two expedition ships designed for polar research and carrying a maximum of just 50 like-minded guests – Spirit of Enderby and Akademik Shokalskiy – on voyages ranging from eight to 31 days, passengers visit remote, indigenous communities and rarely-visited sites such as the sub-Antarctic island of Macquarie and Russia’s Wrangel Island, accompanied by expert botanists, ornithologists and naturalists.