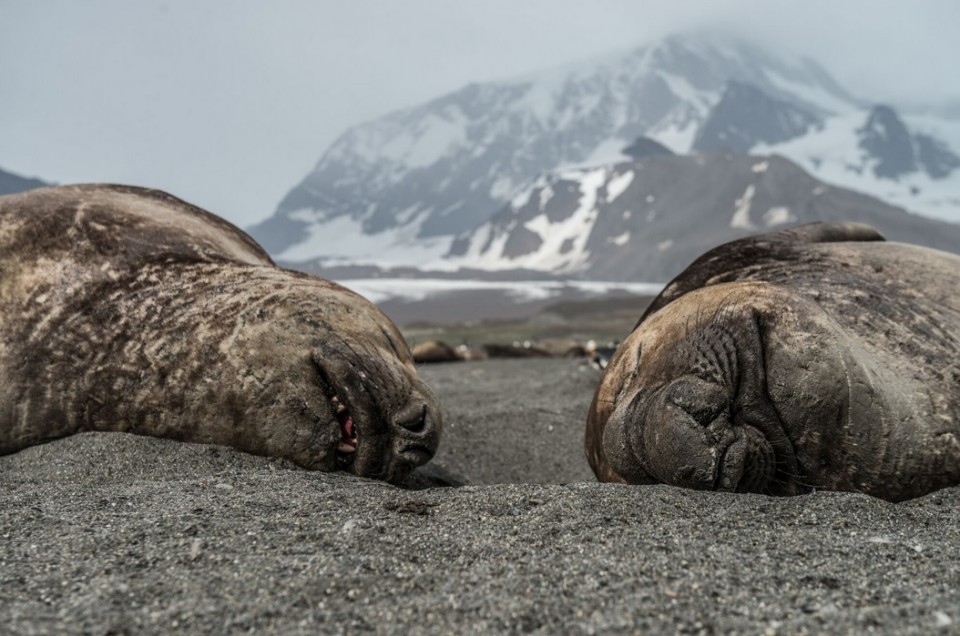 London, 17 July 2017:  Many thousands of miles away in the Southern Ocean, spring is coming to life on the remote island of South Georgia, bringing with it such amazing spectacles of nature that amateur and professional photographers, wildlife enthusiasts and ornithologists flock from around the globe to marvel.

Picture hundreds of thousands of king penguins breeding, nesting and protecting their eggs, while elephant seals mate on the beaches.  Albatross rookeries boasting more than 100,000 nesting birds, and the skies awash with numerous other seabirds including giant petrels and skuas.  And all of this against the ideal photographic backdrop of a snow-covered landscape:  truly stunning.

Early season expedition cruises to South Georgia with specialist small-ship adventure cruise operator, One Ocean Expeditions (OOE), coincide with the island’s emergence from a long, icy winter, as wildlife begins to migrate and the breeding cycle for many species begins.

Passengers travelling on 18 October 2017, Falkland Islands, South Georgia & Antarctica departure (19 nights from US$13,695pp) will have the added bonus of being accompanied by Karen Bass and Neil Nightingale, both award-winning wildlife film makers, who have travelled the world for decades, producing and directing films and television series.

Their knowledge, expertise and experience are second to none and the on board talks, master classes and advice throughout the voyage will add a fascinating extra dimension to an already amazing polar experience.

For those with a special interest in learning how to take the best photographic shots of the region’s plentiful wildlife, South Georgia In Depth departing on 21 October 2017 (14 nights from US$9495pp), which incorporates a Photography Symposium, is the perfect solution.

Among the professional guest photographers who will be on board to guide and advise are South African wildlife photographer and nature guide, Gerhard (Guts) Swanepoel, and award-winning photographer, Daisy Gillardini, who was the proud winner of the 2016 Nature’s Best Photography Grand Prize.

Keen ornithologists will be particularly interested to know that Dick Filby and Simon Boynes will also be joining this voyage.

A further South Georgia In Depth cruise departs on 4 November 2017 (14 nights from US$9495pp) and also has some availability.

Each of OOE’s expedition cruises offers the opportunity to take excursions by zodiac boat, sea kayak and on foot.  In addition to being able to experience intimate encounters with wildlife, adventurers also have the chance to visit historical sites of interest, such as the final resting place of Sir Ernest Shackleton and Frank Wild, his loyal right hand man, in Grytviken.

Prices include return flights between Punta Arenas in Chile and Stanley in the Falkland Islands (where part of the itinerary), airport transfers, accommodation and meals on board, plus guides, wet weather gear, excursions and activities as included in each itinerary.

A limited number of US$1500 international flight credits are also available on these spring departure dates.

For more information on One Ocean Expeditions’ cruises to South Georgia visit: http://bit.ly/2ubnQjU

Karen Bass is a television director and producer with a passion for travel and natural history. In 20 years at the BBC’s Natural History Unit, she made wildlife films in almost every environment: from the rainforests of the Congo to the deserts of Libya, Syria and Jordan; from the icy peaks of the Andes to the swamps of the Amazon; from erupting volcanoes in the Caribbean to the extraordinary lives of crocodiles in Australia and South Africa.

Neil Nightingale has been involved for many years in the production of innovative wildlife projects across a range of media, including films for TV and the cinema, 3D giant screen films, live events, 4D experiences, virtual reality and immersive exhibitions.

Daisy Gilardini is an award-winning photographer and conservationist, who has visited Antarctica and the sub-Antarctic Islands every year for more than 20 years.  Daisy combines her skills as a photographer and love of extreme adventure with a true passion for the natural world and a life-long commitment to the environment and conservation issues.

Gerhard ‘Guts’ Swanepoel has earned his reputation as one of the most sought-after photography guides of his generation following 13 years of guiding and a staggering 1.2 million kilometres travelling across Southern Africa.

Simon Boyes has been leading wildlife tours for almost 40 years and has made more than 20 voyages to Antarctica.  He began birdwatching at the age of just 12 years old and has rarely put his binoculars down since!

Dick Filby has been guiding in Antarctica every season since 1989.  There is no one better placed with whom to share the joys of birdwatching in South Georgia, which is, arguably, his spiritual home and about which he is enduringly passionate.