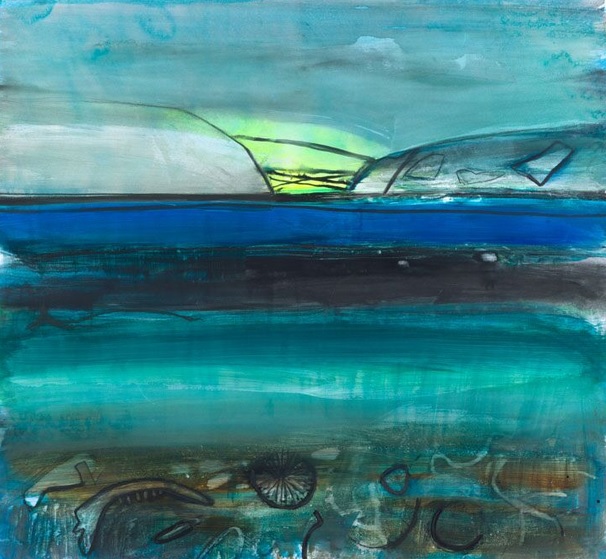 Canadian expedition cruise specialist, One Ocean Expeditions (OOE) will celebrate Canadian art and culture this summer in a number of partnerships at Edinburgh’s major summer festivals. Throughout August, Edinburgh plays host to the Edinburgh Fringe, the world’s largest Arts Festival, and the International Festival, featuring incredible dance, opera, music and theatre performances. Not only has OOE announced their support of a much-anticipated new exhibition celebrating the Northwest Passage by the internationally renowned artist Barbara Rae, they are also proud to sponsor CanadaHub at the Fringe, a showcase of Canada’s best contemporary performance scene.

The artist, Barbara Rae CBE RA RSA, first journeyed to the Arctic in 2013 and was instantly inspired by the landscape and lifestyle of the region as well as the fascinating travels of her namesake, the explorer John Rae, in 1800s. Following further in his footsteps, Barbara Rae voyaged to the Northwest Passage with OOE in 2015, 2016 and 2017, building upon her deep interest in the Canadian High Arctic and its peoples to produce a stunning new body of paintings, monotypes and intaglio prints which draw on the intertwined paths both she and John Rae had travelled.

The exhibition, supported by OOE, will premiere at the Royal Scottish Academy in Edinburgh on 4 August before travelling to the Pier Arts Centre, Orkney in September and London’s Canada House in November.  The RSA Lower Galleries in Edinburgh will be open seven days a week for viewings from 4 August to 9 September 2018; admission is free.

Director of the Royal Scottish Academy, Colin Greenslade, says: “Barbara’s journeys and the story of John Rae, all of which inspired the works, take us on a trip to the Arctic and enables us to see the effect which the light, the land, the history and traditions have had upon Barbara and her practice.”

Barbara Rae will return to the Arctic this summer on OOE’s West Greenland & Baffin Island Explorer – for a journey through the icy landscapes and colourful fishing villages of western Greenland, across the infamous Davis Strait and onto witness the stunning fjords and soaring peaks of Baffin Island – the jewel of the Canadian High Arctic.

OOE is also proud to support CanadaHub at this year’s Edinburgh Festival Fringe, which transforms Scotland’s capital into the world’s largest Arts Festival every August.  In association with Summerhall – Edinburgh’s award-winning arts venue – the launch of CanadaHub marks a month-long showcase of Canada’s most highly respected contemporary performance scene. With a host of award-winning performances from puppetry, experimental theatre, indigenous artists and thought-provoking storytelling, this hub of creativity is a not to be missed celebration of Canadian talent.

From 1-26 August 2018 shows will run Monday-Sunday from 12pm-11pm. Tickets can be bought either in advance through Summerhall or on the door. As part of this partnership, OOE is running a competition in association with The List to win a host of expedition goodies https://goo.gl/fvnsho Entries accepted until 30 July.

Passengers looking to explore the Canadian High Arctic, it’s rich cultural history and spectacular landscapes can join OOE’s 10-night West Greenland and Baffin Island voyage sailing from 5-15 September 2018, embarking in Kangerlussuaq, West Greenland and ending in Iqaluit, Baffin Island. Prices per berth begin at US$6,695pp in a Triple Share cabin and US$8,995pp for a Twin Private cabin plus US$1,995 for charter flights Ottawa/Kangerlussuaq and Iqaluit/Ottawa.

To enter the OOE competition in association with The List: https://goo.gl/2cSAmf

One Ocean Expeditions is a proudly Canadian world leader in expedition cruising. Committed to environmental and social responsibility, One Ocean Expeditions offers passengers personalised marine experiences in some of the most unspoiled and ecologically sensitive places on Earth. With a range of innovative itineraries in Antarctica, the Arctic, Canada’s East Coast, Greenland, Chile, Central America and the Caribbean, and Islands of the North Atlantic, One Ocean Expeditions has earned a reputation for exceptional quality, customer service, industry-leading safety standards, and unparalleled value. In addition to creating once-in-a-lifetime experiences for our guests, One Ocean Expeditions supports environmental awareness and education, world-class scientific research in sensitive ecosystems, historical preservation, and the sustainment of local communities. One Ocean Expeditions maintains ongoing affiliations with an array of scientific and educational institutions, and is proud to serve as the exclusive marine travel partner of the Royal Canadian Geographical Society.

Born in Falkirk, Barbara Rae studied painting at Edinburgh College of Art (1961-65). Travelling to France and Spain on a post-graduate scholarship, her early work drew upon trends of abstraction and mixed media practices in European art at the time. Since her first solo exhibition in Edinburgh in 1967, Rae has gone on to exhibit worldwide. She was elected Associate of the Royal Scottish Academy in 1980 and became a full Member in 1992. In 1996 she was also elected a member of the Royal Academy of Art. She holds honorary doctorates from Napier University, Aberdeen University and the University of St Andrews and is an Honorary Fellow of the Royal College of Art, London.

Born in Orkney in 1813, John Rae trained as a surgeon in Edinburgh. In 1833, he signed on for a short term with the Hudson Bay Company in Canada. Captivated by the landscape and lifestyle, Rae stayed with the company until 1856. Throughout his life he continued to work on several major mapping and charting projects in Canada. Despite locating the Northwest Passage, Rae was the only one of his contemporaries not to be knighted for his Arctic achievements. Rae’s story, along with the history of the indigenous peoples of northern Canada, has spurred on the body of work on which the exhibition is based.

About the Royal Scottish Academy of Art and Architecture

The Royal Scottish Academy of Art & Architecture promotes excellence in contemporary art and architecture in Scotland. Led by eminent artists and architects, it supports the creation, understanding and enjoyment of the visual arts through exhibitions, artist opportunities and related educational talks and events. Re-establishing itself as a leading organisation for the visual arts in Scotland, it has successfully garnered a reputation for the strength of its engaging and diverse exhibitions and the fantastic opportunities it offers both established and emerging artists. The significant recent developments of the RSA have been documented in the recently published book, A Decade of Change(2003-2013).

Presented in association with Summerhall, CanadaHub is produced by Selfconscious Productions in partnership with the Canada Council for the Arts and in association with the High Commission of Canada in the United Kingdom. Selfconscious Productions is an international production company that develops and produces work, books and manages tours and builds contexts for the presentation and representation of work nationally and internationally.