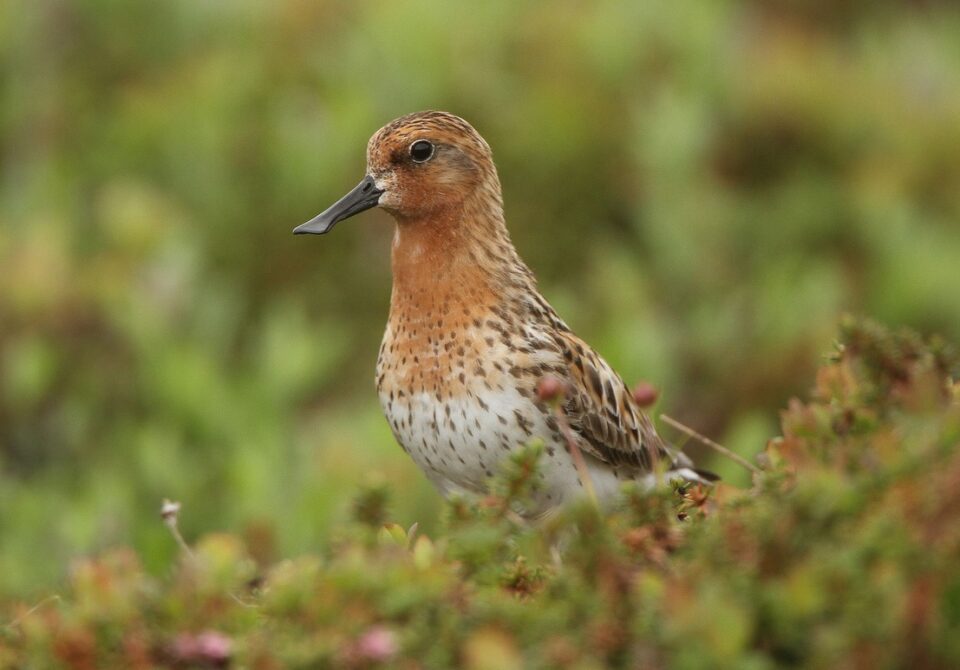 Heritage Expeditions Commercial Director & Expedition Leader Aaron Russ says, “Having supported conservation efforts for the spoon-billed sandpiper (SBS) since 2011, we are thrilled to learn of this latest success, which is part of international efforts to help save this incredible wader from extinction.”

Of the 30 eggs that were collected from the Arctic breeding grounds, 22 SBS chicks were successfully reared in captivity before being released recently into their natural habitat of Meinypil’gyno, Russia.

The head of BirdsRussia, a Russian NGO committed to the Conservation and Study of Wild Birds, Dr Evgeny Syroechkovskiy, explains,  “The birds are completely healthy.  All ‘wards’ were provided with tags before release so that they can be tracked along the migration routes, which began in early August.”  He continues:  “We followed them every day – documenting who has stayed, who has flown away, and who is doing what. ”

The international ‘Head-starting’ project aims to preserve and increase the population of birds and was launched nine years ago with the participation of the Wildfowl and Wetland Trust, British Royal Society for the Conservation of Birds and the International Spoon-Billed Sandpiper Task Force of the EAAFP, and is supported by the Chukotka Government.

These iconic wading birds only breed in Chukotka and northern Kamchatka in the Far East of Russia, a remote and largely inaccessible region, which makes it difficult for researchers who are attempting to identify potential new breeding sites for the birds to visit.

However, Heritage Expeditions, whose purpose-built expedition ships allow them to reach otherwise isolated and inaccessible locations, have been able to support SBS conservation efforts by providing transport for the Spoon-billed Sandpiper Task Force and BirdsRussia. This has enabled researchers to visit parts of the vast, 4,500-kilometre coastline in search of breeding pairs and discover new breeding sites in 2011 and 2016. The company has also delivered a new boat and quad bike to assist research, and even transported spoon-billed sandpiper eggs and chicks bound for a conservation breeding facility.

Spoon-billed Sandpiper Task Force Coordinator Dr Christoph Zöckler describes the partnership with Heritage Expeditions as a groundbreaking example for future cooperation in modern conservation.  “Nature conservation urgently needs more collaboration with tourists to enhance their efforts to save the ailing biodiversity on this planet. Our relationship with Heritage Expeditions is a win-win situation for both, and an outstanding example of an effective relationship between a conservation group and the business sector.”

Passengers who join the 14-day Siberia’s Forgotten Coast expedition will not only be able to view spoon-billed sandpipers in Meinypil’gyno, the main breeding area in Chukotka, they will also have the chance to play an active role in locating new breeding areas in locations that have not been surveyed before.

Each day of the expedition along the Kamchatka coast reveals the richness and diversity of wildlife species in this region.  Highlights include the Commander Islands where sea otters, a variety of whale species and a plethora of sea birds from red-face cormorants to whiskered auklets may be seen, as well as the Govena Peninsula and the largely unknown Chukotka Coast, both of which are home to brown bears.

Heritage Expeditions’ next Siberia’s Forgotten Coast voyage departs from Petropavlovsk-Kamchatskiy on 22nd June 2021.  Prices start from US$7380pp based on a triple share cabin and includes all meals during the voyage and expedition shore excursions.

Heritage Expeditions (HE) has been operating throughout the Russian Far East and Russian Arctic for 15 years.  During this time, the organisation has formed close working relationships with the many layers of regulation involved in operating in Russia to ensure the success of its trips.  HE’s regular presence and ongoing support of science, management and communities in the region is a cornerstone of its programs for both Russian partners and guests.

Each year, HE transports wildlife researchers and ambassadors on its Kamchatka tours.  In addition, in 2017 the company delivered a new boat and quad bike for the SBS taskforce to assist with research and, in 2011, transported eight newly-hatched chicks and 12 fertile eggs from Chukotka, arriving in Anadyr with 17 healthy chicks and three eggs on the verge of hatching, bound for a conservation breeding facility at the Wildfowl & Wetlands Trust in Slimbridge.